Great sundew reintroduced to the mosses 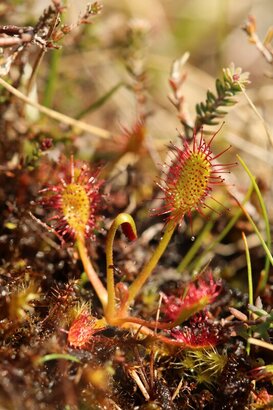 ​Great Sundew (Drosera anglica) is a voracious carnivorous plant which captured the imagination of none other than Charles Darwin, who called it that “wicked dear little Drosera” in a letter to Charles Lyell written in 1860 (https://www.darwinproject.ac.uk/letter/DCP-LETT-2996.xml), when the plant was already well on its way to extinction in Lancashire.
​
Today, in England, the plant survives in fewer than 20 locations, some of these in Cumbria, which is where the NWRPI went to sample a number of leaf cuttings in 2018-19 with the aim of reintroducing the species to the Lancashire area.

So far, we have been successful in raising almost 100 plants of this species, which is red-listed as ‘Endangered’ in England, and, following consent from Natural England, in July 2019, we went onto the Manchester Mosses to plant out 10 of these precious individuals. Given a suitable habitat like the Mosses, each plant is capable of producing thousands of seeds annually, and can flourish in such an environment.

Whilst many suitable areas have been drained, e.g., for agriculture and housing, causing a shocking decline in the species which rely on them, restoration work around the Mosses has made the area wetter, so it is again a perfect location for Great Sundew and other species. 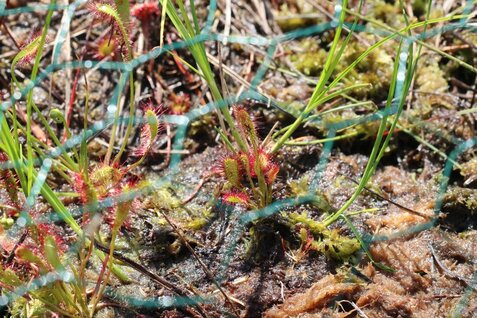 Looking to the future, we are hoping to reinforce this re-established population, with support from the Carnivorous Plant Society, Chester Zoo, Lancashire Wildlife Trust, Warrington Borough Council and Natural England. With luck, and the combined efforts of these groups and others, a large and healthy Great Sundew population will once again be luring insects into its sticky clutches on the Mosses.