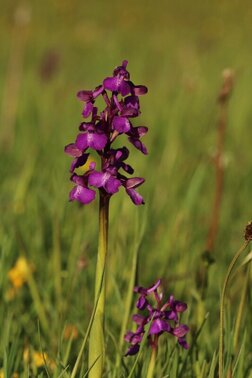 Green-winged Orchid (Anacamptis morio) has declined by over 80% in the North West in the past 100 years, making it an ‘Endangered’ species in the region. Agricultural intensification and the huge loss of traditional hay meadows have played a massive role in this decline, although it was more targeted human activity in the form of orchid ‘collectors’ that eradicated the last population in Cheshire Vice County in the late 1970s.
​
Thankfully, the reinstatement of traditional grassland management at a secret location and Site of Special Scientific Interest (SSSI) in Cheshire means that this attractive plant can now be reintroduced, and in early February 2020, under special consent from Natural England, NWRPI set out to do just that. With the help of Sarah Bird from Chester Zoo, Dr Richard Bate and Caroline Maghanga, we took 15 plants from a site in Hightown on the Sefton Coast, where they grow in abundance (30,000+), and relocated them to the Cheshire site. 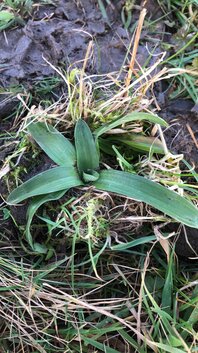 ​Obviously, we have to ensure that the plants are removed in the most suitable way, and to that end we take turfs of around 15x15cm, just enough to collect all/most root material and enough topsoil to ensure that the plant’s fungal associate will be present in the translocated turfs. Our target sites are always assessed in advance, to ensure that their floristic assemblage is correct for the particular species being relocated; floristic assemblages on this receptor site most closely approximate to an 'MG5 Crested Dog’s-tail - Black Knapweed' neutral grassland, with the same kind of management in the form of a once yearly cut.

Future work with this species will include reintroduction to two more suitable receptor sites in Cheshire, and also two in Greater Manchester, as well as monitoring of this newly reintroduced population.