White beak-sedge back from the brink 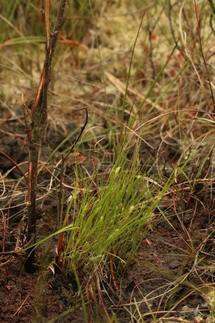 ​As White Beak-sedge (Rhynchospora alba) favours wet, acidic and nutrient-poor soils, thriving in Sphagnum-dominated bogs and flushes, it is often used as a positive indicator for the health of such ecosystems. However, it has been missing from most of South Lancashire since the mid-1800s following the loss and degradation of over 98% of the county’s lowland peat mosses, although Travis's Flora of South Lancashire (1963) describes it as historically ‘abundant’ and ‘formerly frequent’ on many of the peat mosses.

Interestingly, the Hampshire Cultural Trust’s online collection holds a herbarium sheet of an individual collected in 1841 from Clifton, near Manchester – a precious record indeed! Over 175 years later, in 2018, the NWRPI with consent from Cheshire Wildlife Trust and Natural England began efforts to reintroduce the species to the area, at Risley Moss SSSI, which is part of the Manchester Mosses SAC. 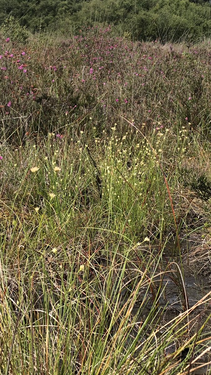 When surveying the site in 2019, the plant’s area of occupancy was found to have grown by over 150%, with plenty of seedlings present. In 2020, following aided dispersal of plants in the winter of 2019, the area occupancy had increased by over 400% (see maps below). Thus, at Risley, White Beak-sedge is beginning to become a common component of Sphagnum bog pools, as it is in all remaining healthy raised mires across the region of NW England.
​
As a side note: in 2018, when assessing the suitability of another site, Astley Moss, for the reintroduction of a variety of species with Mark Champion, Wigan Reserves Manager, we were amazed to find two plants of White Beak-sedge already present. As Mark commented at the time, this discovery “shows that the re-wetting work by Lancashire Wildlife Trust and its partners at Natural England is starting to pay dividends now as the habitat is improving and the rarer species are colonising…We concluded that the population was regenerated by native Astley stock from the seedbank, which lies under the soil.” This demonstrates that nature can bounce back from even near extinction, given the right conditions.
​
Our task for 2021 in relation to this species is to continue monitoring its progress at both Risley and Astley, and look at reintroducing it to other suitable sites in the area.